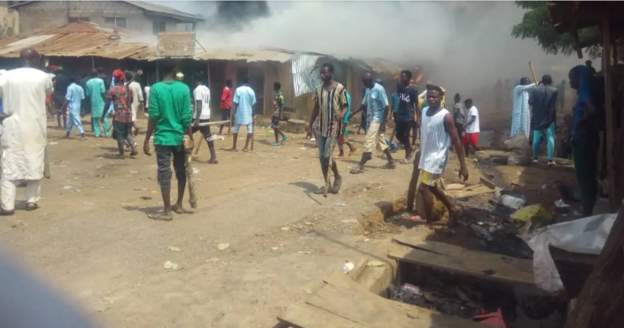 At least 10 people have died during ethnic clashes that began at a busy market in the Nigerian city of Ibadan in Oyo State.

The governor of south-western Oyo State has imposed a dusk-to-dawn curfew to contain the violence in the city.

It began after a wheelbarrow pusher, believed to be from the ethnic Hausa group, allegedly hit and killed a Yoruba man during an altercation.

The south-west of Nigeria is seen as the home of the Yoruba ethnic group, and Hausa people mainly live in the north of the country.

Witnesses say some Yoruba youths then began retaliatory attacks on Saturday against members of the Hausa community.

The chairman of the Traders’ Union at Shasha Market, where the trouble erupted, told the BBC that they had so far recovered at least 10 bodies.

He said more than 100 others were wounded and dozens of shops and homes had been burnt down.

According to the police spokesperson in Oyo State, Olugbenga Fadeyi, officers were still gathering casualty details but had intensified patrols in the area. The attacks on northerners residing in the Shasha area of Ibadan.

Tension over a long-running row over cattle grazing has generated a lot of anti-northerner sentiment in southern Nigeria.

Read also: Jack Dorsey and Jay-Z back bitcoin in Africa

Fulani herders, who like the Hausa people originate from the north, and their families, walk for hundreds of kilometres to central Nigeria and beyond at least twice a year to find the best grazing land for their cattle.

But this has often led to friction, and in recent years deadly clashes, with local communities, who accuse the cattle of trampling on their crops, and sometimes accuse the herders of robbery and other crimes.