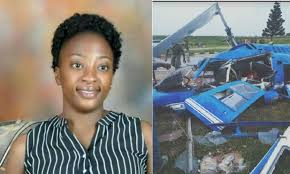 Uganda’s army has confirmed the death of a pilot in a helicopter crash after take-off near Entebbe on Thursday.

“Today afternoon at about 2:15pm a jet ranger piloted by two cadet trainees on a mutual training flight came down immediately after take off near Lido beach. The two were rushed to hospital to ascertain their health,” she said.

The person who died was identified as Captain Caroline Busingye.