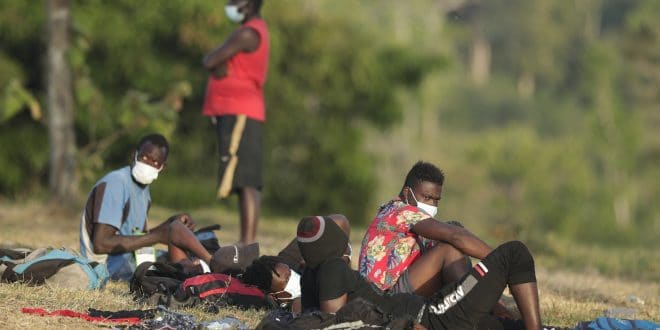 Haitian migrants sit on the grass at a migrant camp amid the new coronavirus pandemic in San Vicente, Darien province, Panama, Tuesday, Feb. 9, 2021. Panama is allowing hundreds of migrants stranded because of the pandemic, to move to the border with Costa Rica after just reopening its land borders. (AP Photo/Arnulfo Franco)

Hundreds of migrants stranded near Panama’s border with Colombia

Ibrahim AMEDAHEVI 2 semaines ago In the news, Migrations Leave a comment

Hundreds of migrants from Haiti, Cuba, Africa and India are stranded at camps in the Darien Gap near Panama’s border with Colombia.

Some recount the horrific journey they made to reach the encampment area since it was not easy.

Hundreds of migrants traveled from Africa to South America then through the Darien Gap, a dangerous jungle at the border of Colombia and Panama, as part of a large ethnic group persecuted for being dark-skinned descendants of slaves.

« The journey to the Darien Gap was a great experience that I would never like to experience again in life, you understand? I am not with my family, but I’m with friends, but we did not have it easy, it’s not easy, it’s a journey between life and death, » a migrant narrated.

Meanwhile, border police officers said that the Central American country is expecting the arrival of another wave of « approximately 800 migrants » in the area.

« We have information that approximately 800 migrants are moving towards our areas of responsibility. We have been preparing to receive this migratory wave in the different MR, the migratory reception stations, » the executive of the First Oriental Brigade of Panama National Border Service (SENAFRONT), Jorge Bernal, said.