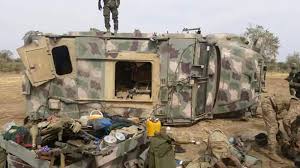 Dozens of Islamist Boko Haram militants have been killed by Nigerian soldiers in a major operation the north-east of the country.

The soldiers are said to have gained access into the notorious Timbuktu Triangle in the vast Sambisa Forest, located between Borno and Yobe States.

Sources close to the Nigerian military say that the operation involved Nigerian troops and the multi-national joint task force.

Some people who had been kidnapped by the militants were rescued. Two soldiers were killed while three others were seriously injured.

The insurgents no longer control huge swathes of territory in Nigeria’s north-east, but continue to carry out attacks on both military and civilian targets mostly ambushes.