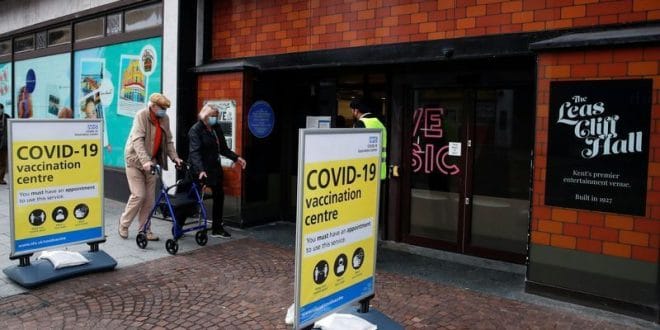 People enter a closed down Debenhams store that is being used as a vaccination centre to receive the coronavirus disease (COVID-19) vaccine in Folkestone, Kent, Britain January 28, 2021. REUTERS/Andrew Couldridge

According to a junior British Minister, Britain cannot publish details of the AstraZeneca covid-19 vaccine supply contract because it would jeopardize national security, as the European Union threatened drug companies over supply delays.

Scotland will publish covid-19 detailed vaccine supply data next week even though the British government has refused to do so.

“I think we’ll just go back to publishing the actual supply figures from next week, so that we all have transparency around that,” Sturgeon told the Scottish parliament on Thursday.

British prisons Minister Lucy Frazer said the government had been transparent with data but could not publish supply details for national security reasons which she repeatedly refused to specify.

Read more : Covid-19: extension of lockdown in Zimbabwe ‘to save lives’

Kate Bingham, the former head of the UK’s vaccine taskforce, said the country had been able to secure supplies by supporting pharmaceutical companies, setting up clinical trials quickly and helping firms procure equipment to scale up manufacturing.