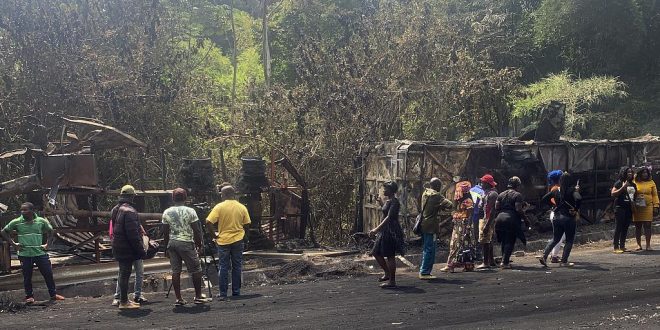 Cameroon: Questions on emergency services after 53 die in bus crash

After a collision between an interurban transport bus and a truck loaded with fuel at the Cliff of Dschang Western Cameroon left 53 people dead and 29 seriously injured, the question of responsibility is now being raised

Many people say that the presence of firefighters in the town of Dschang, equipped with water and state-of-the-art equipment, could have reduced the number of deaths and saved many lives.

Eyewitnesses say the flames burned the bus passengers for several hours without any intervention by the fire fighters.

Accused of having escorted the truck of petroleum products of unknown origin, the customs services are in the hot seat.

According to a note from the security services, the contraband fuel cargo was escorted by a gendarme and a customs officer who fled immediately after the accident. Which unit did they belong to? Are they part of the trafficking network?

The issue of night travel is resurfacing. The Minister of Transport has announced the opening of an investigation to establish the responsibilities of each party and to “take appropriate measures”.

In the meantime, he believes that the accident of Wednesday, January 27, 2021, which caused the death of 53 people and seriously injured 29, “highlights the problem of night travel that some interurban passenger transport companies are fond of”. It envisages their “supervision”.

The tragedy that occurred on January 27, 2021 is one of the deadliest road accidents in the history of Cameroon. It also raises the issue of overloading in interurban transport buses in Cameroon.

In 2011, Bello Bouba Maigari, the Minister of Transport at the time, had banned night travel beyond 9 pm.

The Cameroonian authorities estimated that these trips accounted for 5% of passenger traffic but caused 35% of accidents. Under pressure from trade unions financed by transport company promoters, the government backed down.

Pending the new measures, Cameroonian authorities including the Head of State Paul Biya have sent condolences to families of the victims.