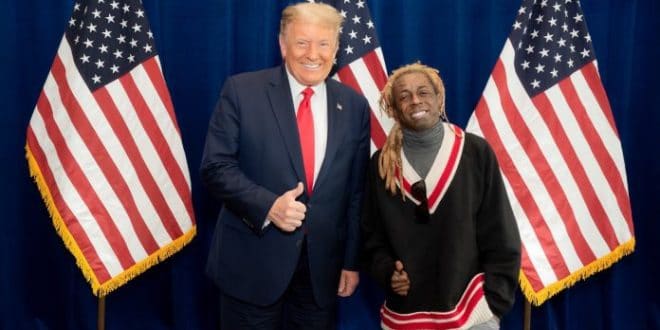 In the last hours of his stay in the White House, the former American president Donald Trump decided to pardon 73 persons. The very last gesture has been benefited by Lil Wayne.

Lil Wayne benefits this Tuesday like 72 other people, from a presidential pardon in the last day of Donald Trump’s term.

The American singer pleaded guilty last December for possession for firearm. The interpreter of Lolipop was found with a weapon and ammunition during a private jet search at Miami by the Police in December 2019. However the law in Florida prohibits convicted persons from possessing arms. He risked 10 years in prison.

“President Trump and his adminisration were the unfailing lawyers of the Afro-american community… these graces are the perfect examples of this administration which follows its reforms and commitment”, has reacted Bradford Cohen, lawyer of the rapper.

Last October 29, the American rapper posted on Twitter a photo of him and president Trump. It was a significant support for Donald Trump who was running for a re-election in the White House.

It must be admitted that in 2020, hip-hop artists who still admire Donald Trump were just a few. Accordong to Huffingtonpost, only Lil Pump, Wacka Flocka Flame and Lil Wayne publicly show him their support.