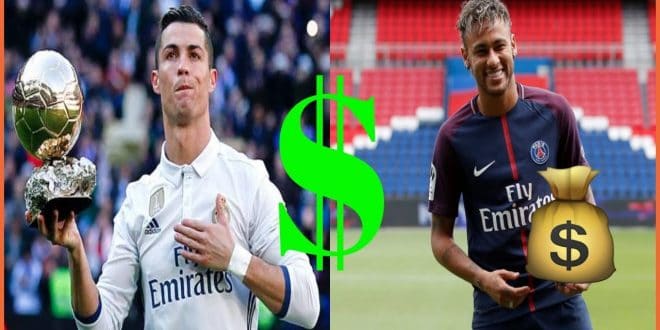 Ibrahim AMEDAHEVI 15 January 2021 In the news, People Leave a comment

From Lionel Messi to Cristiano Ronaldo, Neymar,etc. these international players have not really felt the effects of the Covid-19 pandemic on their earnings. In the list of the most winning players in 2020 made by Forbes, these stars without surprise are the top ten of the ranking.

The Argentinian is the top of the list, with a fortune of more than 102.5 million euros accumulated in 2020.

Ronaldo has a salary of € 57million from Juventus, however, he has surpassed 95million with income from his business connections and advertising.

The PSG star receives more than 15 million thanks to advertising and sponsors in addition to 63.4 million euros from his club.

The young French player is not left out with a salary of 22.7 million from PSG and a little over 12 million in other income.

With a salary of 19.5 million, he also managed to earn just over 10 million from his sponsorships, reaching 30 million in total earnings.

The Manchester United midfielder earns around 22.8million this year, but his advertising revenue is just over 5million.

Read more : Didier Drogba breaks the silence and talks about his divorce

The Barcelona striker is one of the most valuable players in the Catalan team with a salary of 22.7 million including 4 million coming under his sponsorship.

The Golden Boot winner and Bayern Munich super striker also receives one of the top salaries at 20 million, although he has only managed to generate another 3 million from sponsorships.

The only goalkeeper on the list has generated € 20million he receives for his participation with Manchester United with just an additional € 2million received through the ad.