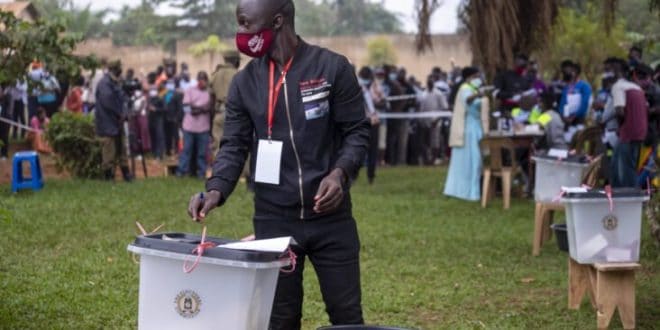 Jonathan Carreidas 15 January 2021 In the news, Politics Leave a comment

Ugandans of voting age were called to the polls in order to choose their president and deputies. While we feared overflows in the country, the vote took place peacefully in Kampala.

Most of the voters went to the poll earlier in the morning . Security forces were deployed near the polling stations but patrolings were less visible in the city lately.

The opposition candidate Bobi Wine voted without incident at Magere, in the northern part of the Ugandese Captital, in the middle of a large crowd which had gathered to welcome him. “Despite the wide spread fraud and violence experienced across the country earlier today, the picture still looks good. Thank you Uganda for turning up and voting in record numbers. The challenge now is for Mr. Byabakama and the EC to declare the will of the People”, has he tweeted.

The outgoing President Yoweri Museveni on the other hand was in his native region, in the west of the country.

The poll stations were closed shortly after 4p.m. In some stations like that of the National theater, a first count was realized in front of the observers of the different parties.

Some voters stayed or returned to ensure the transparency of the vote count. The ballots were sent to the National center.

The Electoral Commission has until Saturday 4p.m to announce the results.