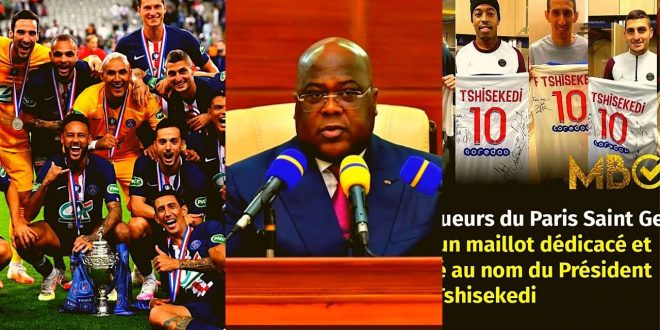 Ibrahim AMEDAHEVI 8 January 2021 In the news, People Leave a comment

Many players of Paris Saint Germain (PSG) Football Club offered to the Congolese president Felix Tshisekedi flocked and signed jerseys in his name.

The players of the Paris Saint Germain Football club having learned that Felix Tshisekedi is one of their unfailing supporters , decided to offer him a jersey flocked and signed in his name. The jersey is marked with the number 10.

During an interview on a french Tv, Felix Tshisekedi said that he was one of the great fans of the French team.

“I love France? I have never lived there but I visit it. Since my childhood, I have always loved France and its team. My favorite club is PSG.” has declared felix on france 24.

Read more: PSG: The real reasons that justified the dismissal of Thomas Tuchel

This declaration of Felix Tshisekedi was received by the players of PSG whowithout delay show their joy oofering him jerseys as dedication.