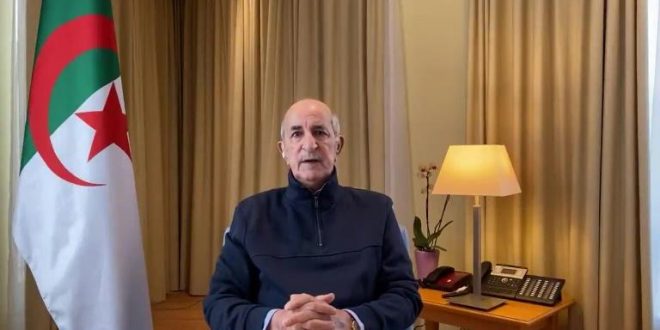 Hospitalized on October 28 in Germany for having contracted covid-19, Algerian president appears in the evening of December 29 on television. Abdelmadjid Tebboune’s plane had landed at Alger a few hours earlier.

At the airport, President Tebboune was greeted by several senior Algerian officials, including Prime Minister Abdelaziz Djerad and the Army Chief of staff.

The Algerian Head of state declared that it had been « difficult for him to be far from his country «, in a sequence broadcast yesterday on the national Television at 8 p.m.

Apparently in better health than during his last appearance on December 13 when he was emaciated and weakened, Abdelmadjid Tebboune has apparently regained weight and has suggested that he is almost cured.

In a short intervention, he wished “a Happy new year to all Algerians, much better than 2020“, he said.

Aged 75 and a heavy smoker, the Algerian president had to leave the Aïn Naâdja military hospital in Algiers for a specialized hospital in Germany in October.

At the end of the treatment, he left the hospital at the end of November, but had extended his stay in Germany for a period of convalescence.

He must return to the country before December 31 to sign the 2021 finance law adopted by Parliament but also to validate the new Constitution voted in a referendum contested on November 1.