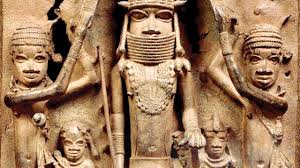 The 20 objects, which were looted in the 19th century, were handed over by the German Foreign Minister, Annalena Baerbock, at a ceremony in the capital, Abuja, Nigeria.

Germany wants to make amends to Africa. During the year, Berlin decided to repatriate works of art looted in Africa.

Speaking in Abuja at the ceremony to return some of the artefacts, German Foreign Minister Annalena Baerbock said ” it was an opportunity to right some of the wrongs of the past.”

She added that the looting of these objects was part of efforts to deal with a “dark colonial history.”

Among the objects returned were some of the famous ceremonial heads, an ivory carving, and a decorated plaque.

During the colonial era, Germany ruled parts of West, East and Southern Africa until the end of World War I.

The Nigerian National Commission on Museums and Monuments issued official requests for repatriation to museums around the world.