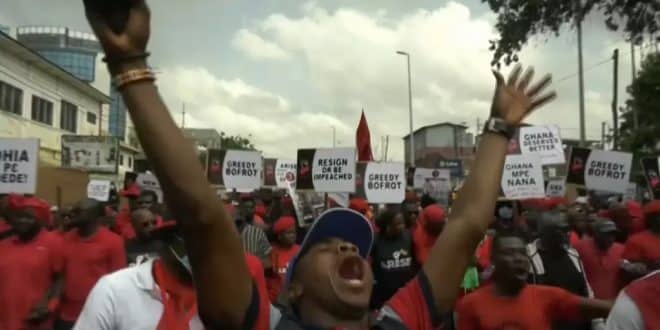 Faced with the galloping inflation in Ghana, currently estimated at 37%, hundreds of Ghanaians took to the streets of Accra on Saturday 5 November to denounce the deteriorating economic situation, French media RFI reported.

“Resign or be impeached! Politicians eat, Ghanaians suffer!” : the slogans chanted by the crowd were addressed directly to the political class, accused of inaction in the face of soaring fuel and food prices.

The protesters called for the resignation of President Nana Akufo-Addo and Finance Minister Ken Ofori-Atta, both accused of mismanaging the crisis.

A week earlier, President Nana Akufo-Addo had promised to “restore order” in the foreign exchange market to counter the depreciation of the national currency, the cedi.

He also pledged to support local production in order to reduce dependence on imported goods. These measures were intended to be reassuring but did not convince.

Before his election in 2016, the head of state had assured that he would do without international aid; this was his slogan: Ghana Beyond Aid.

On July 1, 2022, however, he announced that he would seek IMF assistance again, a few days after new anti cost of living protests in Accra.

Covid and the war in Ukraine have wrecked Ghana’s economy. A change of direction that worries.