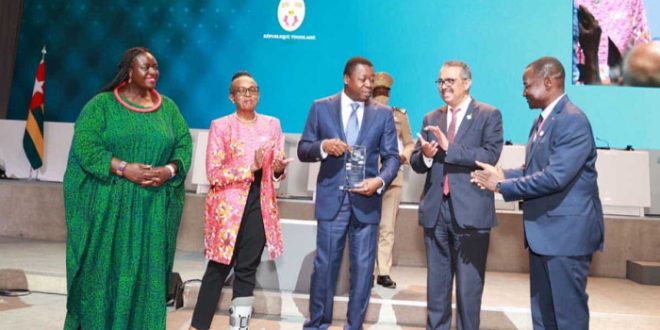 Health: Togo obtains a certificate of recognition from the WHO

First country in the world to have eradicated four neglected tropical diseases such as dracunculiasis, lymphatic filariasis, human African trypanosomiasis (HAT) and trachom, Togo has been officially distinguished by the World Health Organization (WHO) through a certificate of recognition, this Monday, August 22, 2022.

It was during the launch of the 72nd session of the World Health Organization (WHO) Regional Committee for Africa, which is being held in the Togolese capital, Lome, from August 22-26.

Togo first eradicated Guinea worm transmission in 2011, lymphatic filariasis (elephantiasis), six years later in 2017. In 2020, despite the Covid-19 health crisis, Togo managed to get rid of human African trypanosomiasis (HAT) or sleeping sickness, an endemic disease on the continent, transmitted by the bite of the tsetse fly. In May 2022, the country validated the elimination of trachoma, becoming the fourth African country to reach this milestone, after Morocco, Ghana and Gambia.

“This is not only a great achievement, but also a gift for future generation,” WHO director, Dr Tedros said.

According to the WHO Africa agenda, the 72nd session of the Africa Religional committee will be devoted to issues related to the Regional Strategy to fight serious non-communicable disease, the framework for strengthening the implementation of the action plan mental health, financial risk protection for universal health coverage in WHO Africa Region, a framework for the integrated control, elimination and eradication of tropical and vector-borne diseases in the African region 2022-2030, or the strengthening of the UN agency, for more effective and efficient support provided to African countries.