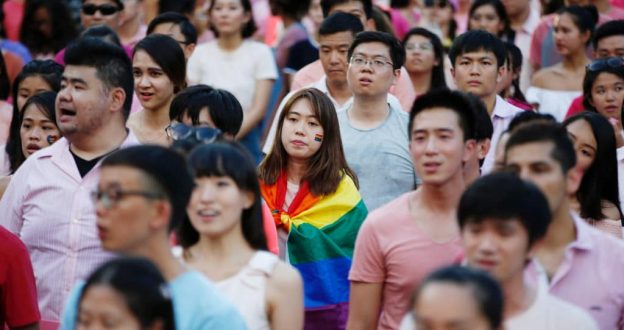 FILE PHOTO: A woman wrapped in the rainbow flag is seen at the Pink Dot rally, Singapore's annual gay pride rally, at a park in Singapore July 1, 2017. REUTERS/Darren Whiteside/File Photo

Elise ATAYI 22 August 2022 Asia, In the news, Politics and society Leave a comment

Singaporean Prime Minister Lee Hsien Loong said on Sunday that his government would repeal the law that criminalizes same-sex relations.

Only few days and sex between men won’t be reprehensible anymore in Singapore. Autorities decided to repeal the law that criminalizes homosexuality. It is the Singaporean Prime Minister who gave the information.

“Nowadays homosexuals are more accepted and it’s the best thing to do, most of the Singaporeans will accept it,” PM Lee Hsein Loong declared.

“I hope this will offer some form of relief to homosexuals in Syngapore,” he added.

Moreover, the Prime Minister believes that the new law will allow the country to be in tune with new mores.

The repeal of this so-called law 377A, currently in force, had been demanded for years by a growing part of the Singaporean population.