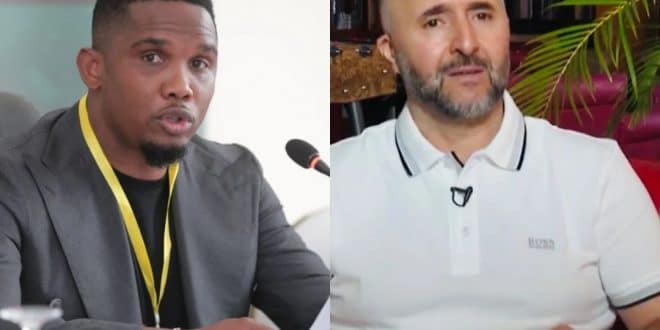 The president of the Cameroon Football Federation (FECAFOOT), Samuel Eto’o was not kind to the Algerian coach Djamel Belmadi after his controversial remarks about the referee who led the second leg of the qualifications between Algeria and Cameroon for the 2022 World Cup.

The Algerian coach on the Federation’s TV said “No referee will come and undermine an entire country. When I saw this referee sitting in the airport lounge the next day having a coffee and eating a millefeuille as if nothing had happened… They steal hopes of an entire country and leave it like that… I’m not saying that he should be killed, but we will no longer accept this kind of situation.”

As expected, the Cameroon Football Federation did not fail to react.

The institution led by Samuel Eto’o has strongly condemned the defamatory remarks of the Algerian leaders and reserves the right to bring the coach of Algeria before the FIFA Ethics Committee.

“Cameroon reserves the right to bring the case in the coming days before the FIFA Ethics Committee,” Samuel Eto’o wrote in a statement released on Monday.