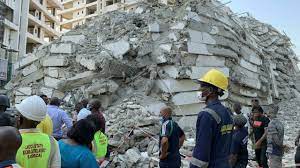 Two survivors have been rescued from a collapsed building in Nigeria’s commercial city of Lagos, news agency AFP reports.

The partially built 22-storey block of luxury apartments came down on Monday in the wealthy Ikoyi neighbourhood.

At least five people have died and dozens are missing, the authorities say.

Despite heavy rain, rescue workers and locals used floodlights to work through the night, digging through rubble and twisted metal. Four survivors have been pulled from the wreckage.