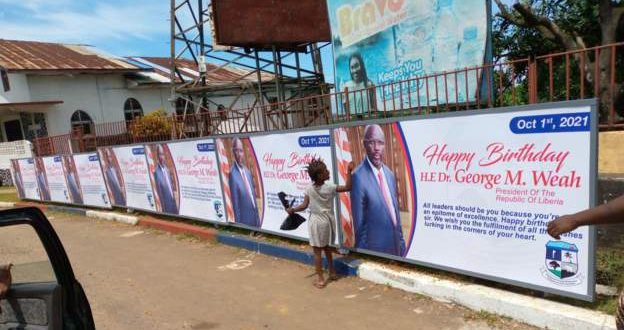 Liberia: posters of George Weah plastered in the streets as his birthday approaches

Billboards with large portraits of Liberian President George Weah are being lined up on the streets of the capital Monrovia, ahead of his 55th birthday on 1 October.

The billboards being erected by the Monrovia City Council are currently all over central Monrovia and other parts of the city.

It’s an ongoing exercise and each billboard is carrying the same message.

“All leaders should be you, because you’re an epitome of excellence. Happy birthday, sir. We wish you the fulfilment of all the wishes lurking in the corners of your heart,” reads the message.

Ruling party militants say the president deserves this and are excited to see their leader’s portraits all over the place. But critics say the billboards display insensitivity in a nation facing economic hardships and where majority of the population are poor, BBC News reports.

Recall that the young mayor of Monrovia, Jefferson Koijee, also celebrated his birthday with extravagant events which included a street parade by supporters and a large exhibition of his images in the streets.