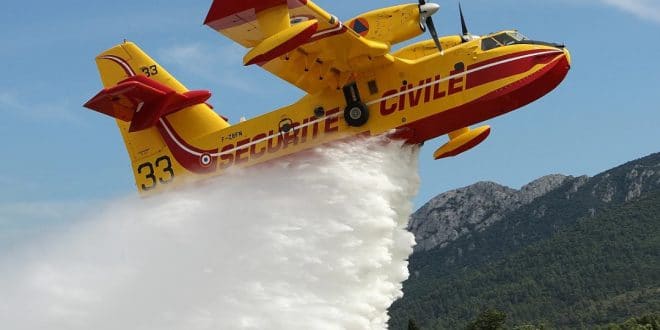 Facing the wildfires which continue wreaking havoc in the Kabylia region, French president Emmanuel Macron is not indifferent. As a gesture of solidarity, he promised to send two Canadairs and a command plane in order to stop the advance of fires.

Through a Tweet, the French president called Algerians “friends of France” and said their solidarity is unreserved.

The Canadair CL-415 is an amphibious water bomber aircraft manufactured by Bombardier Aerospace (formerly Canadair) in Canada. It is specialized in fire fighting.

The bush fires have already left 65 dead and many wounded, according to the latest figures published by the national television.

Note that Kabylia is not the only affected region: the extent of the disaster also affects Wilayas (prefectures) in the east, such as Jijel, El Taref, Skikda, Khenchela (which has already experienced major fires there a few weeks ago), Guelma, Sétif, etc., but also the center towards Médéa and Blida, south of Algiers.