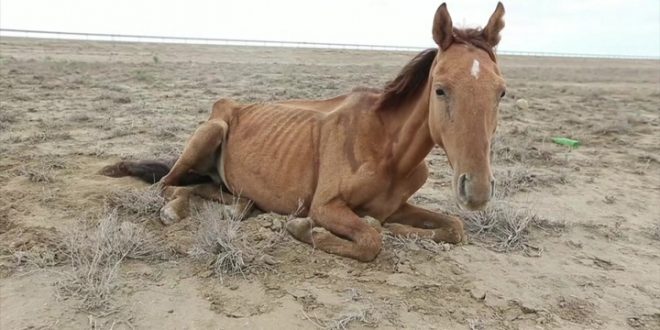 Drought kills hundreds of horses, sheep and cows in Kazakhstan

Ibrahim AMEDAHEVI 9 August 2021 Asia, In the news Leave a comment

Images of horses lying on the ground, dead, or very emaciated, walking in desert territories, are circulating in Kazakhstan, where the strong heat of this summer has led to droughts, especially in the Mangistau peninsula (west of the country). 1000 horses, sheep and cows lacking water, but also food, have died in this region, according to Reuters.

“We had two or three years of drought, the grass was not growing well, but it was not at the point this year,” Gabidolla Kalynbayuly, 70, herder in the Mangistau, told the agency.

He explains that in his herd, 20 of his horses and a camel have died in recent weeks. The others are very fragile and lack food and water.

Eurasianet also relays the story of an activist, who published images of very emaciated and struggling horses at the end of May in the western part of this region.

“There is no time to think, only to act,” Berdimurat Torekenov wrote on Facebook at the time, calling on the government to declare a state of emergency and the population to come to the aid of the farmers suffering from the drought.

It is difficult to measure the number of dead animals due to the heat, but according to Masbek Sadyrbaev, president of the National Association of Animal Breeders, the government underestimates the figures. At the beginning of July, he gave 500 dead animals in the Kyzylorda region, while Imasbek Sadyrbaev himself counted 500 dead in a single village in this territory.