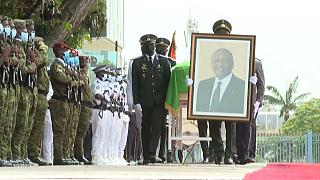 The late Ivorian Prime Minister Hamed Bakayoko, who died of cancer in Germany last week, was buried in the west of the country next to his father’s grave.

The private ceremony took place at the family farm about 6km (nearly four miles) from the western town of Séguéla.

Beforehand the family attended Friday prayers at the Grand Mosque in Séguéla.

Hamed Bakayoko was appointed prime minister in July last year after his predecessor, Amadou Gon Coulibaly, died of a heart attack. Patrick Achi has been appointed as interim PM.

He had previously served as the country’s Minister of New Technologies, Information and Communication, Minister of the Interior and Minister of Defense.