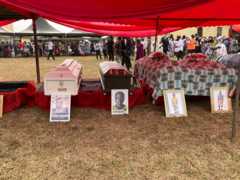 Ghana grieves for group of teenagers who died at sea

A mass funeral has been held for 13 teenagers whose bodies were found off the coast of Ghana just over a week ago.

Twenty teenagers are believed never to have returned after going swimming off Apam beach in southern Ghana.

Seven bodies have not been found.

Twelve out of the 13 children were buried on Tuesday, as one of the teenagers was buried on Thursday because their body was badly decomposed.

It’s a tragedy on a scale the fishing community in Apam has never witnessed.

Ghana’s coastline is notoriously dangerous because rip currents in the Gulf of Guinea are very strong, but this tragedy is a stark reminder for authorities to reconsider safety measures along the coast.