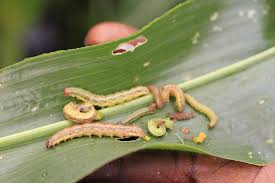 Authorities in the central Mozambican province of Zambezia say the funnel caterpillars have destroyed around 143 hectares (353 acres) of crops, BBC News reports.

At least 60 families who depend on farming have complained of damage in the district of Mocuba.

Farmers had been told to spray their farms with insecticides and to use other mechanical means to combat the pests, local official Florentino Cardoso said.

Read also: A policeman detained in Uganda for killing a student

The district government is already on the ground to deal with the situation that threatens to jeopardise maize production.

The funnel caterpillar is a pest which mainly likes to feast on maize.