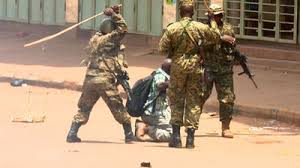 Assault of journalists by Uganda military condemned by United Nations

The UN has condemned an attack by the Ugandan security forces that left several journalists injured as they were reporting on the opposition MP the opposition leader Bobi Wine who was highlighting allegations of human rights abuses in the country.

The police said security personnel were dispersing an uncontrolled crowd and said it was unfortunate that journalists were injured.

It comes amid growing concern at the ongoing clampdown against the opposition following President Yoweri Museveni‘s victory in a disputed election.

Videos show members of the Ugandan military police chasing after journalists and beating them with long sticks.

Some reporters were left with serious injuries including bleeding cuts to the head.

The brutal incident took place right outside the UN Human Rights Office in the capital, Kampala.

The media was there as Bobi Wine was about to meet officials to call for an investigation into rights abuses.

His party says a number of supporters are missing and alleges some have been tortured in detention.

It seems the Ugandan authorities fear the popular appeal of Bobi Wine.

But unarmed civilians being bludgeoned will give yet more publicity to the musician who says he joined politics to end oppression in Uganda.