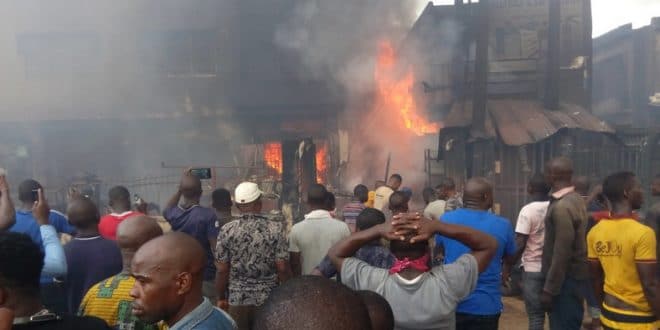 Hundreds of shops burn down in Abuja market fire

Hundreds of shops and stalls have been completely burnt in an overnight at a market in the Nigerian capital, Abuja.

One person sleeping in the market was burnt to death in the incident at the Tippa Garage Market in the Gwarinpa district.

Assorted goods including food, building materials and clothing were sold there.

Many traders who gathered at the remains of the normally busy market told the BBC that they had lost everything.

Some were in tears and others were visibly shocked.

Market chairperson Usman Abdullahi said although they have yet to ascertain the exact extent of losses, they could run into millions of dollars.

Fire service and market officials say the fire started at around 01:00 local time on Thursday and raged for hours, reducing the entire market to ashes.

They say it was the result of a power surge when electricity was restored after an outage.

The authorities say a delay in alerting the fire service and lack of access road to the market hampered efforts at extinguishing the fire, which had begun to spread to neighbouring homes before it was contained by the fire service.

Read more: Vaccinal passports: path back to normality or problem in the making?

Junior minister for Nigeria’s capital Ramatu Tijjani Aliyu, who led a government delegation to the market, promised the government’s assistance to the traders.