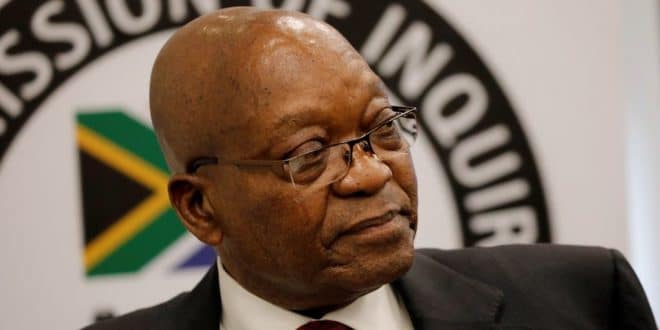 Former South African president Jacob Zuma is seen on the third day of testimony before the Commission of Inquiry into State Capture that is probing wide-ranging allegations of corruption in government and state-owned companies in Johannesburg, on July 17, 2019. - Former South African president Jacob Zuma on July 16 rebuffed all accusations of wrongdoing on his second day of testimony at an inquiry into corruption under his rule

The Zondo commission,a South African commission investigating corruption during the presidency of Jacob Zuma has faulted his decision not to obey summons to appear before it later this month.

According to the Zondo commission, Mr Zuma’s decision is “completely unacceptable”.

Mr Zuma is scheduled to appear before the commission from 15 to 19 February, but on Monday said that he would rather go to prison than obey the summons.

His defiance followed last week’s order by a constitutional court compelling him to appear before the commission.

“It seems that Mr Zuma considers himself to be above the law and the Constitution. The Commission reiterates that in terms of the Constitution everyone is equal before the law,” the Zondo commission said in a statement.

It added that it would announce what further action it will take should Mr Zuma not appear before it.

The commission was established in 2018 to investigate the “state capture” scandal during Mr Zuma’s tenure as president.

The scandal revolves around allegations that the wealthy Gupta family, who are close friends of the former president, used their relationship to unfairly secure millions worth of dollars of government contracts.

It is also alleged that they were able to influence political decisions, including the naming of ministers.

The former president and the Gupta family deny any wrongdoing.

Mr Zuma has previously said that the commission was biased against him.