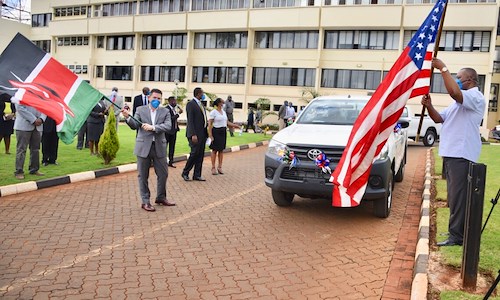 Kenya is ‘determined’ to sign a trade agreement with US

Kenyan President Uhuru Kenyatta says the country is determined to sign a new trade deal with the US despite a change in US president.

The two countries initiated trade negotiations in July 2020. But in November, the US voted Republican President Donald Trump out of office and his successor, Democrat Joe Biden, has just been inaugurated as president.

The deal, if signed, will be the first between the US and a sub-Saharan African country and will replace the African Growth and Opportunity Act (Agoa) which allows Kenyan exports into the US without paying duties, or taxes. Agoa is set to expire in 2025.

Concerns have been raised that an agreement between the two would undermine existing trade protocols with regional bodies such as the East African Community.

It remains unclear whether Mr Biden’s administration will continue with the bilateral talks or will instead forge a multilateral trade approach such as with the Africa Continental Free Trade Area (AfCFTA).

But observers expect the US’s new administration to adopt a new policy that will be more beneficial towards African countries compared to that of “America First” under Donald Trump.