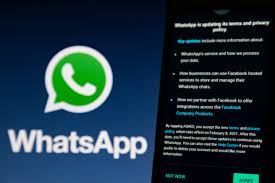 Whatsapp: what will be the changes from February 8?

Ibrahim AMED 13 January 2021 Business, In the news Leave a comment

For few days, Whatsapp users are worried about the announcement done by the social network on January 4, about the next changes especially on personal data. Between misunderstanding and worries, here are some keys to understand the changes.

From February 8, Whatsapp will share the personal data with Facebook, if the users have an account on the social network or not. Unlike the changes of 2016, if the more than 5 billion users of Whatsapp refuse this sharing , they won’t use Whatsapp.

That is the message the social network is trying to send to its users. The purpose of this data sharing is to help enterprises which are over 50million registered on Whatsapp, exchange targeted with companies.

Facebook does not make money with WhatsApp. It now wants to make it profitable by making WhatsApp the preferred and paid means of communication for companies around the world to interact with their customers. This by offering these companies the possibility of using Facebook’s secure hosting infrastructures to host their WhatsApp conversations if they do not wish to store their messages themselves. Companies will also have the possibility to propose their products and services for sale on WhatsApp.

Even if WhatsApp retrieves a minimum of personal data, the messages are still protected by an end-to end encryption that guarantees privacy.

To avoid undergoing this disputed rule, many users are migrating to Signal, a free app that looks like WhatsApp, but respects the privacy and personal data of its users.

Signal is offered by an independent and non-profit organization. The number of users has climbed for a few days on Signal, causing a bit of a wait when signing up new users. It is also the most downloaded application in recent days on the App Store.