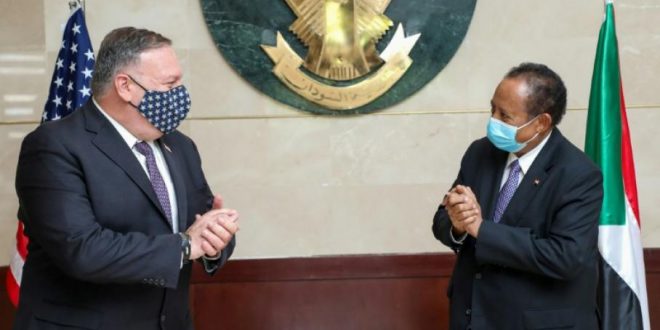 Sudan is removed from the United States blacklist. One year and half, after the crisis that toppled Omar El Bechir, Washington lifts sanctions on Khartoum. An announcement that gives economical breath to Sudan.

It’s the American Head of diplomacy, Mike Pompeo who confirmed the withdrawal of Sudan from the countries supporting terrorism; a list on which was Sudan for 27years.

After accusing Omar El Bechir of having relations with jihadist organizations when he received Oussama Ben Laden on his territory, the United States imposed a sanction to Khartoum in 1993.

‘‘1998’s attacks against the United States embassies in Kenya and Tanzania resulting in more than 200 deaths, attacks claimed by Al-Qaida and the atrocities committed by the Sudanese forces and their auxiliaries during Darfur’s war pushed Sudan in the category of pariah countries for the United States’’, specifies the Liberation Newspaper.

But since then, a rapprochement has taken place between Sudan and the United States.